You might have read that title and thought, “What, are they crazy, no way!”

Truth is, all Microsoft Windows products have a lifecycle. The lifecycle of a product begins when a product is released and ends when the product is no longer supported.

Even Windows 10 has a lifecycle that Microsoft has created to keep systems secure and under support.

You may ask “Why is this important?”

Yes, it may not seem important because most consumers keep the out-of-the-box settings. Which is ok, especially for security updates on a Windows 10 system.

However, when it comes to PC’s that adhere to a corporate policy, that policy might use Group Policy settings configured by an administrator per the organization’s lock-down and patch maintenance policies to defer Windows 10 updates. An administrator may find their systems fall into the “unsupported” Microsoft realm because they reached their “End of service” date if they are running a version of Windows 10 that has surpassed that date.

For example, an organization running the original Windows 10 (version 1507) release of July 2015 would find the End of service for that release ended on May 9th, 2017. As of the publish date of this article, that’s already over four years without support from Microsoft.

One good note is that Enterprise and even Education editions of 1511, 1607, 1703, 1709, 1803, 1809, and 1903 in some cases receive additional time of service after the end of service date expires. This is good to know, especially in the event that a patch management cycle takes longer than expected or pushes a specific version of Windows 10 past its End of service date.

However, knowing the End of service date for each version of Windows 10 provides an administrator with knowledge as to when they should ensure the corporate systems are updated, and at the very least know how often they should patch.

See the table below for End of service dates:

Your next question may be “What happens if my version is End of service?”* Home edition does not support the deferral of feature updates and will therefore typically receive a new version of Windows 10 prior to the end-of-service date shown.
** Enterprise and Education editions for versions 1511, 1607, 1703, and 1709 will receive an additional 6 months of servicing after the end of service date.
Note: Not all features in an update will work on all devices. A device may not be able to receive updates if the device hardware is incompatible, lacks current drivers, or is otherwise outside the original equipment manufacturer’s (OEM) support period.

This answer is both Good and Bad.

However, before explaining the good and bad, let’s prerequisite it with why Windows 10 lifecycle is the way it is.

Microsoft decided that Windows 10 would be the last version of Windows to hit the shelves. Prior to Windows 10, if you wanted the latest and greatest Windows operating system that meant you had to purchase a new Windows OS. Whether that was going from Windows 95 to 98, or to Me, or to Windows 2000, and so on. This method also meant you had to wait longer between revisions of the OS and consequently deal with incompatibilities when that move to a new Windows OS finally occurred.

Instead, Microsoft found a solution that would provide a way to have the latest and greatest every year by offering Windows as a service. Recently Windows 11 has been announced, this means the stance on Windows 10 being the last Windows version to be released has been recanted. See the notes below to learn how to get Windows 11 or test your current PC hardware.

End of service means your Windows 10 system is no longer supported (to a degree, see the Good below.) If you happen to call Microsoft for support, you would need to pay an additional fee. Whether a home user or a corporation depends on what that cost is.

Support is easily remedied by simply updating Windows 10 to a version that is not End of service. If you’re a home user, you are most likely on the latest version, press Windows + R and then type winver in the run command and press enter to see a Windows 10 dialog with information about Windows 10. 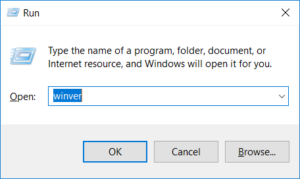 This window will display the “Version” of Windows. 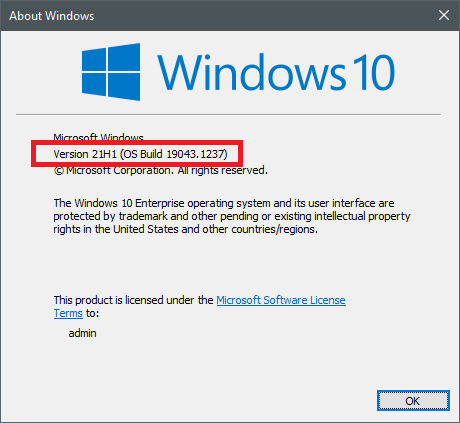 Running Version 21H1? Congrats, you are on the latest version since the revised publishing date of this article. Not on Version 20H2? Take a look at Windows Update and see if any updates are waiting to be applied!

Updating a system from version 1507, then applying a version after 1607 would bring that system back in-line with Microsoft support. However, keep in mind that each version of Windows may introduce some incompatibilities with applications and device drivers – Testing is still as important as ever, but that’s an article for another time.

We use cookies on our website to give you the most relevant experience by remembering your preferences and repeat visits. By clicking “Accept”, you consent to the use of ALL the cookies.
Do not sell my personal information.
Cookie SettingsAccept
Manage consent

This website uses cookies to improve your experience while you navigate through the website. Out of these, the cookies that are categorized as necessary are stored on your browser as they are essential for the working of basic functionalities of the website. We also use third-party cookies that help us analyze and understand how you use this website. These cookies will be stored in your browser only with your consent. You also have the option to opt-out of these cookies. But opting out of some of these cookies may affect your browsing experience.
Necessary Always Enabled
Necessary cookies are absolutely essential for the website to function properly. These cookies ensure basic functionalities and security features of the website, anonymously.
Functional
Functional cookies help to perform certain functionalities like sharing the content of the website on social media platforms, collect feedbacks, and other third-party features.
Performance
Performance cookies are used to understand and analyze the key performance indexes of the website which helps in delivering a better user experience for the visitors.
Analytics
Analytical cookies are used to understand how visitors interact with the website. These cookies help provide information on metrics the number of visitors, bounce rate, traffic source, etc.
Advertisement
Advertisement cookies are used to provide visitors with relevant ads and marketing campaigns. These cookies track visitors across websites and collect information to provide customized ads.
Others
Other uncategorized cookies are those that are being analyzed and have not been classified into a category as yet.
SAVE & ACCEPT